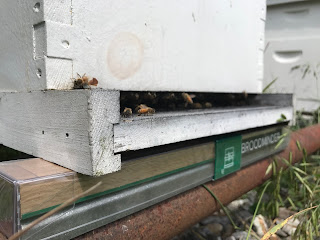 A year ago, I would have told you a hive scale was just a toy for rich beekeepers. After all, I have been getting by without one for many years, using the tried and true method of lifting the back of the hive to get a sense of weight. Sometimes called hive tilting, this lifting technique works best when you have several hives to compare against. But all you can really do is rank your hives, using loose rating terms like "light", "moderate" and "heavy".

This brings up the question, why spend good money on a hive scale? It turns out there are now some really good reasons: First, the price of hive scales has dropped enough to entice even tight fisted sceptics like me. Second, after actually using one for a bee season, I find it actually improves the quality and timing of my beekeeping decisions. It gives me actionable information, not just about one hive but nectar flow in my bee yards.

In one of my bee yards here in Oregon, the nectar flow has been very poor. We were hit by a drought, and are still in the grips of it. Our main nectar flow, blackberry, was a bust. But this is only a vague description. The hive scale brings the problem into much sharper focus. It told me the rate of nectar flow, when the nectar flow had peaked and indicated the start of hive weight decline. I simply could not have got this kind of precision by hive tilting. With a single hive scale, I was able to get a good indication of the nectar flow for the whole bee yard, and this guided my feeding decisions for the whole yard. Armed with this evidence, I decided to feed sooner than I ordinarily would to build up their weight for winter and, with any luck, extend the brood season.

In the chart below, you can see the same colony weight for a three month window. It is quite apparent the nectar flow peaked around the second week of July, quite early for our area. And even before this I could see that, although the hive was gaining weight, it was not gaining enough to justify harvesting honey. The hive was on a trajectory to barely have enough for winter. So I did not super any of the hives in this bee yard, and this turned out to be a good decision. They are going to need all they could get just to survive the winter.

So what did the scale do for me this year?
(It could also have told me about swarm events and hive robbing, but this hive avoided those problems.)

So what is my conclusion? For me, having at least one hive scale in every bee yard is a good investment. It gives me actionable information that influences my management decisions about the entire bee yard. It gives precision and trends to make evidence- based beekeeping decisions. One day hive scales will become inexpensive enough to put one on every hive, but for now, one per bee yard is a good start.

Welcome to the Bee Farm Blog